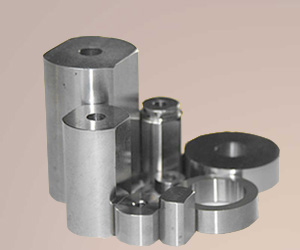 Alnico magnets are made from aluminum, nickel, cobalt, iron and a few other elements, such as copper, titanium, and sulfur. Alnico magnets are relatively easily demagnetized, but resisting oxidation well.
Alnico alloys make strong permanent magnets, and can be magnetized to produce strong magnetic fields. of the more commonly available magnets, only rare-earth magnets such as neodymium and samarium-cobalt are stronger. Alnico magnets produce magnetic field strength at their poles as high as 1500 gauss (0.15 tesla), or about 3000 times the strength of Earth's magnetic field. Some brands of alnico are isotropic and can be efficiently magnetized in any direction. Other types, such as alnico 5 and alnico 8, are anisotropic, with each having a preferred direction of magnetization, or orientation. Anisotropic alloys generally have greater magnetic capacity in a preferred orientation than isotropic types. Alnico's remanence (Br) may exceed 12,000 G (1.2 T), its coercivity (Hc) can be up to 1000 oersted (80 kA/m), its energy product ((BH)max) can be up to 5.5 MG Oe (44 T A/m). This means alnico can produce a strong magnetic flux in closed magnetic circuit, but has relatively small resistance against demagnetization.
Alnico is produced by casting or sintering processes.[4] Anisotropic alnico magnets are oriented by heating above a critical temperature, and cooling in the presence of a magnetic field. Both isotropic and anisotropic alnico require proper heat treatment to develop optimum magnetic properties - without it alnico's coercivity is about 10 Oe, comparable to technical iron, which is a soft magnetic material. After the heat treatment alnico becomes a composite material, named "precipitation material"-it consists of iron and cobalt rich[5] precipitates in rich-NiAl matrix.
Alnico's anisotropy is oriented along the desired magnetic axis by applying an external magnetic field to it during the precipitate particle nucleation, which occurs when cooling from 900°C (1,650°F) to 800°C (1,470°F), near the Curie point. Without an external field there are local anisotropies of different orientations, due to spontaneous magnetization. The precipitate structure is a "barrier" against magnetization changes, as it prefers few magnetization states requiring much energy to get the material into any intermediate state. Also, a weak magnetic field shifts the magnetization of the matrix phase only, and is reversible.
Alnico alloys have some of the highest Curie points of any magnetic material, around 800°C (1,470°F), although the maximum working temperature is normally limited to around 538°C (1,000 °F).[6] They are the only magnets that have useful magnetism even when heated red-hot.[7] This property, as well as its brittleness and high melting point, is the result of the strong tendency toward order due to intermetallic bonding between aluminium and its other constituents. They are also one of the most stable magnets if they are handled properly.